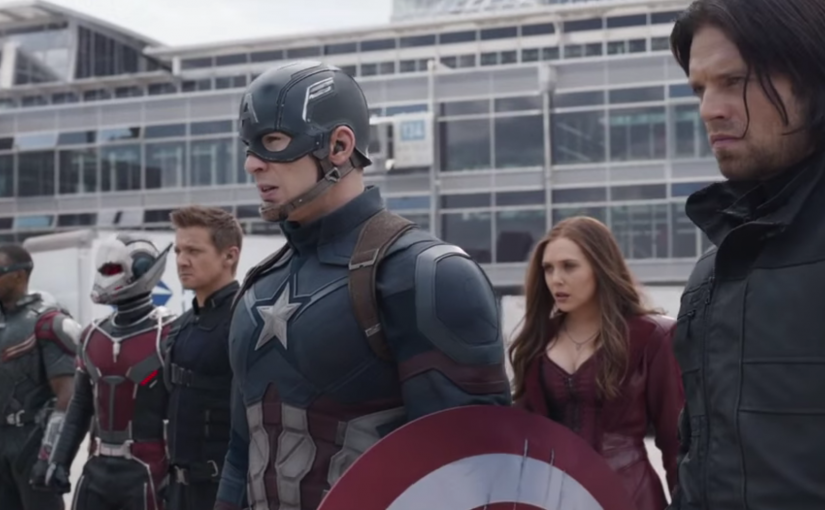 Civil War starts with the creation of the “Winter Soldier”, a figure whose personal and political history establishes him as a negative doppleganger for Captain America. Significantly, it is political ideology (the “red book”) that makes this hero a villain, overcoming his rationality, eradicating his individuality and transforming him into a willing tool of the state. The critique of collectivism implied here (as also in the nonsensical text which subdues Bucky’s reason) subsequently becomes the major theme of the film, which argues that collectivism is dangerous not only because it undermines the individual’s freedom to act with virtue but also because it can lure even the well-intentioned into serving as the unwitting pawns of those with political power.

As the film transitions to its main plotline, we see a number of Avengers struggle to battle an incident involving biological terrorism. While the casualties are light compared to the deaths averted, the group’s inability to avoid any collateral damage invites political intrigue, and when the squad returns to New York a second “red book” is thrust upon them in the form of the Sokovia Accords, a text which parallels its Soviet predecessor with a similar call for the subordination of individual freedom to the collective interests of the state. The thematic lines established in the prologue are then redrawn on a larger scale, as the Avengers are asked to choose between accepting government oversight (collectivism) or standing in defense of individual liberty (individualism).

Although the audience is clearly assumed to be sympathetic to both sides, the script offers unblinking support for its titular hero and subtextual criticism for the team led by Iron Man, which is criticized as lacking any basis for siding with authoritarianism. Interestingly, none of the Avengers who fight with Captain America in Lagos end up supporting the Sokovia Accords (the Black Widow is the exception that proves the rule, the double agent who switches sides exactly when her personal interests require it), while all of those who acquiesce to government oversight are disconnected from the events they condemn. The American Secretary of State, for instance, is an official who brags of a “perspective” (read: distance and non-involvement) gained through forced retirement. His lack of understanding is paralleled in the grieving mother who waylays Tony Stark over the death of her son, the King of Wakanda (whose isolationism signals abdicated responsibility for maintaining regional peace), and even the main villain Zemo, whose mission to avenge his murdered family (paralleled in the similar vengeance quests of Tony Stark and the Black Panther) is sparked by his experience of their deaths at a distance.

The role that digital media plays in creating and nurturing unfounded grievances is one of the more interesting sub-themes in the film: suggested by the visuals of violence which play-and-replay on monitors and mobile devices in doing so provide the pretext for the state suppression of individual freedom. While Captain America and the Scarlet Witch have a meaningful discussion of their own failures, other characters can only criticize from a position of ignorance. Yet personal experience is emphasized as being of paramount importance to proper moral judgment. When the Black Panther confronts Zemo at the climax, it is his personal experience with his father’s death which allows him to transcend vengeance (unmasking and regaining his humanity) and become a heroic figure rather than an agent of vigilante justice, a moral reversal which changes his home from the “Wakandan prison” dismissed ironically by Stark mid-film to the hospital refuge which safeguards and heals the Winter Soldier in voluntary seclusion at film’s end.

For further evidence Civil War sides with Captain America and informed individual participation in politics, consider how the script confirms Captain America in his critiques of the Sokivia Accords. When discussing the State Department’s ultimatum with the other Avengers, Captain America follows his generic defence of liberty with the more subtle observation that if the state itself is corruptible, what seems to be the collective interests of society may in fact be the private agendas of those in power. And this is exactly what the film shows to those who read it closely: the grieving mother who convinces Tony Stark of the necessity of oversight is clearly motivated not by her public role as state functionary so much as her unrelenting private grief; Tony Stark admits that his support is due mostly to the way the agreement offers a politically expedient way for him to repair a tarnished personal relationship (and repress his own desires); and of course the villain Zemo is a manipulative force who drives the action behind the scenes and manipulates all of the players for his own private purposes.

The international community’s attempts to foist the Sokovia Accords on the American government are also shown to be hypocritical. Note the irony in the way the Wakandan government’s proposal to regulate “enhanced individuals” is justified on democratic grounds when the same country is a not a democratic system, and does not subject its own subjects (the Black Panther) to international monitoring. It is surely one of the more pointed ironies of the film that this new hero — who is credited with the success of the diplomatic efforts — immediately follows their enactment with a vigilante crusade that violates the new rule of law.

Although Civil War generally eschews more complex symbolism, the film’s criticism of the Sokovia Accords does come out in some traditional symbolic ways, such as the way the Iron Man contingent suffers far more than Captain America’s in their set-piece airport battle, a sequence which shows multiple characters on the collectivist side unexpectedly stripped of their “powers” (read: virtues) or who find said powers newly unreliable and/or self-destructive: Iron Man’s multiple concussions, War Machine’s broken spine, and Vision’s loss of “clarity” (a symbol of blindness which parallels Tony Stark’s black eye) all indicate on a basic symbolic level that these characters are in the wrong. For a more trivial example, when Vision is shown sitting in defeat at a chessboard, the black king dangling from his hand, the image is evocative of Stark’s earlier warning that the Avengers themselves are now “in check.”

And just as the Avengers who accept oversight lose virtue, the film shows the American government growing more repressive and militaristic as the Sokovia Accords take root. Not only do the police dispatched to capture The Winter Soldier adopt an unnecessary kill-first policy, but the prisoners they capture end up being treated unequally under law, with the least fortunate (ironically the most innocent) character denied due process or legal representation. The imprisonment of Bucky is then paralleled in the deliberate grounding of the Scarlet Witch as well as the eventual imprisonment of the other heroes in a black jail that exists beyond the protection of national law. The way the script refers to these incidents as “internments” also suggests -— as does the appearance of the Lend/Lease pens as the signing instruments for the Sokovia accords -— that the state itself is moving towards militarism and war.

And this brings us to the end of the film. Tony Stark’s rejection of the State Department as the film moves towards closure turns him towards a more ambiguous rejection of what the Sokovia Accords represents. Yet when confronting Bucky at the Siberian enclave, Iron Man falls to the same temptation as the villain Zemo, tempted into the pursuit of blind vengeance by the murder of his family. In the battle which follows, all of the heroes suffer fundamental wounds indicative that it is this militaristic violence which is ultimately self-destructive (a theme alluded to in the multiple references to The Empire Strikes Back), and in which the behavior of the characters also indicate the fallen state of American virtue.

And this is perhaps the most interesting moment of the film. For what do we have at the climax but the rejection of America by the figure meant to represent its cardinal virtues? The message of this sequence — which sees Captain American discard his shield — then followed by the heroic figure’s liberation of his imprisoned crew, is the idea that a real American will embody the virtues of American values even if doing so requires him to abandon patriotism. As the Platonic embodiment of individualism, Captain America casts off his country when its government becomes inconsistent with those ideals, and while the film ends on a note of tragedy, it also contains the promise that America can and may return whenever the country itself returns to its embrace of individualism.