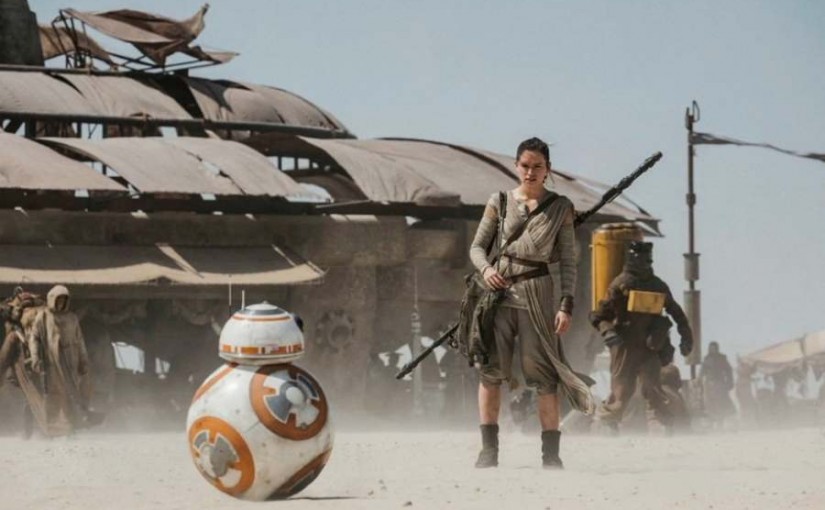 Having written previously on Attack of the Clones, and with a few people asking for my thoughts on the new film, I though it might make sense to write them down. But that also makes this review different than the others on this site, since my feelings about The Force Awakens are much more mixed and uncertain.

Starting with the positive, the new film is clearly a labour of love by Abrams and his collaborators. I personally thought the movie had a tendency towards excessive action, but Harrison Ford, John Boyega and Daisy Ridley were great. And BB8 is also a lot of fun, especially once you start saying his name in Chinese (bi-bi-ba).

In terms of the general themes that seem to be lurking in the story, the major one is the presence of good within evil. Both Finn and Rey are introduced to us as monsters, and we get the same dramatic reversal with Han Solo (who appears when we expect a villain) as well as our new Yoda figure, who shows up somewhat unexpectedly in a “hive of scum and villainy”. This is a mythic theme, and it is probably not accidental that both Rey and Finn seem to be at the opening stages of the Joseph Campbell monomyth (“the refusal of the call” is particularly apparent), where outer victories are easy and the inner self has yet to appear as the true villain which must be overcome. Interestingly, as with Luke’s similar challenge in the original trilogy (contextualized by references to The Searchers), Rey’s journey is also a quest for family and love.

Emotionally, there are a few moments like Rey’s discovery of Luke’s lightsaber which work as well as anything in the original trilogy. Heading into the basement (a cave of the self) what our hero finds is the truth within: her own identity (a Jedi) with virtue symbolised in the sword she will presumably wield in the films to come. The sweeping close of the film where we rediscover Luke Skywalker high above the problematic waters of the subconscious also worked for me both thematically and emotionally; I’ll be surprised if Luke ends up taking the weapon, and it was an interesting move for the film to end with the hero turning away (inappropriately) from adventure and the call for self-understanding.

Finally, one of the devices I thought was really well handled if intentional was the “lost map” subtheme. When Lucas used a similar device in Attack of the Clones, he was making a moral point using a literary device. In that case, the Jedi obliviousness to the existence of Kamino (like the Gungan planet a waterworld symbolically associated with unrestrained emotionalism and violence) was meant to symbolize their own blindness to the sorts of uncontrolled emotionalism and violence (“forbidden love” and “aggressive negotiation”) responsible for the fall of the Republic. If the new film is consciously using similar themes, the disappearance of Luke (mirrored by the “disappearance” of R2D2 who also symbolizes friendship and love) seems to serve the same thematic point: telling us that the world itself and those who inhabit it have lost the same positive qualities of friendship and love associated with Luke Skywalker. And so the discovery of Luke and the “awakening” of R2D2 may point to conscious design on the part of the scriptwriters.

With that said, the new film also doesn’t seem to me (at least on first viewing) nearly as coherent or sophisticated as Lucas’ masterpieces. While The Force Awakens is filled with references to the original trilogy, for instance, the allusions seem to exist primarily as knowing-winks to the audiences, telling us that the filmmakers prefer the original trilogy to the prequels. This is a sharp difference from the older films, where Lucas played with variations in order to make deliberate thematic points. To offer a specific example of this, if only to show how more sophisticated Lucas seems at this than Abrams, consider the way The Empire Strikes Back sent Leia into an astroid cave at the same time that Luke passed into his own magic tree cave on Dagobah. Both journeys were symbolic encounters with the monsters-of-the-id, and the comparison was deliberate: warning that Leia’s lack of control over her confused emotional appetite (sexualised as the parasitic and phallic monsters which threatened the ship) were as potentially destructive as Luke’s lack of emotional maturity (which also threatened to scuttle his own craft).

The subtlety with which Lucas handled these comparisons added depth to his entire saga. While Luke’s defeat of Rancor (hatred) in Jedi offered an allegorical victory that reversed his defeat in Empire, note the same technique in Leia’s parallel defeat of Jabba (carnal appetite). Later films would continue to play with these comparisons. Amidala’s progressive sexualization during her gladiatorial execution in Attack of the Clones not only recalls Leia’s similar struggle in Jedi, but through its inverted logic reminds us that Amidala is making a moral error: embracing “secret love” and “aggressive negotiation” and inviting defeat through her embrace of uncontrolled and problematic emotionalism, a point also made at the end of The Phantom Menace, with its direct subjugation of the rational self to the emotional one.

For another example of these same scenes resurfacing as moral commentary in the prequels look towards the sinkhole sequences in Revenge of the Sith. When Obi-Wan arrives at a cave-filled planet and was told that “there is no war here unless you’ve brought it”, the point was to tell us that the Jedi were bringing violence into a situation that be resolved peaceful. The comparison emphasized the inappropriate rejection of pacifism, and worked with other symbolic shifts to suggest the Republic was becoming evil. The allusions here and elsewhere were deliberate and purposeful attempts at moral commentary, and foreshadowed the destruction of the Jedi by their own aggression, pacifists who would be destroyed exactly as they marched into war.

But in contrast to this wonderful intertextuality, I couldn’t see a similar level of conscious design in the new film, and the references which felt loving and enthusiastic simultaneously felt scattershot and random. And so while Maz’s home in The Force Awakens calls to mind both the cantina from A New Hope as well as the hellish underworld of Jabba’s palace, I can’t figure out why our new Yoda figure is doing business in such a problematic place? And why is she doing business at all in a saga where it is negative characters like bounty hunters or two-faced friends who make “deals” and “bargains” or where the Light Side refers continually to friends as “allies” while the Dark Side speaks of them as “assets”. Perhaps later films will return us to this planet where we will see the temples stripped of commerce and greed and eventually restored to virtue. But surely Maz is already virtuous? And why is she a pirate anyway? Is she also to undergo a character journey?

Some of the things Lucas did quite deliberately are also missing. Perhaps most strangely, aggression in The Force Awakens doesn’t seem to cause any problems. The good guys resort quite casually to violence, yet their actions rarely backfire as in the original trilogy, where attackers would consistently lose. So whereas the battles in the older films (even the climactic set pieces) served as high-level critiques of violence, in the new film they seem to be put on mostly to subdue the audience with special effects. But considering the pains Lucas took to ensure consistency on this point (most notably with the Greedo edit, which eliminated the sole case of an attacker actually winning) this is a strange oversight for Lucasfilm and it calls into question the entire deliberate design of the whole film. And this is especially a problem for me in the final encounter between Rey and Kylo Ren, since it could have been trivially fixed simply by having Kylo Ren attack first.

And then finally there is also the death of Solo, who is rewarded for an act of loving self-sacrifice with an ending utterly inappropriate for a benevolent character. In past films when characters in Star Wars “fell” down reactor shafts or leapt out of speeders, we had Lucas manipulating fairly standard biblical and directional symbolism. Luke’s plunge at the end of Empire, for instance, was triggered by his attacking (rather than confronting) Vadar and led to his symbolic crucifixion on the weathervanes below Bespin and his corporal dismemberment (loss of humanity). Likewise, Han and Luke’s use of violence in their attempt to rescue Leia on the first Death Star gave them a similar plunge down a garbage chute, a journey into the belly of the beast (a figurative water hell) which implicitly critiqued their resort to violence and from which they were only rescued by friendship and love (symbolised in R2D2). And there are so many references in the original films to “nightmares” into which characters “fall” only to be rescued by friendship that having such negative imagery associated with Han Solo is troubling. And on a related note, having his murder happen after Kylo Ren “demasks” is also problematic, since the mask is traditionally commentary on the moral state of the individual: the removal of it is indicative of humanity restored.

Obviously, it may be that these points will be cleared up in the future, as the design and emotional point of the new trilogy becomes more obvious. Things that are not clear here may become clear as the overarching design of the saga becomes apparent. But it may also be that The Force Awakens will ultimately be remembered as a nostalgic film, but not one that really did much with the canvas given to it. My hope is that we’ll end up with the former instead of the latter.

2 thoughts on “The Force Awakens”